Android Vs iPhone: Which One is More Secure?

Posted in News by Mike 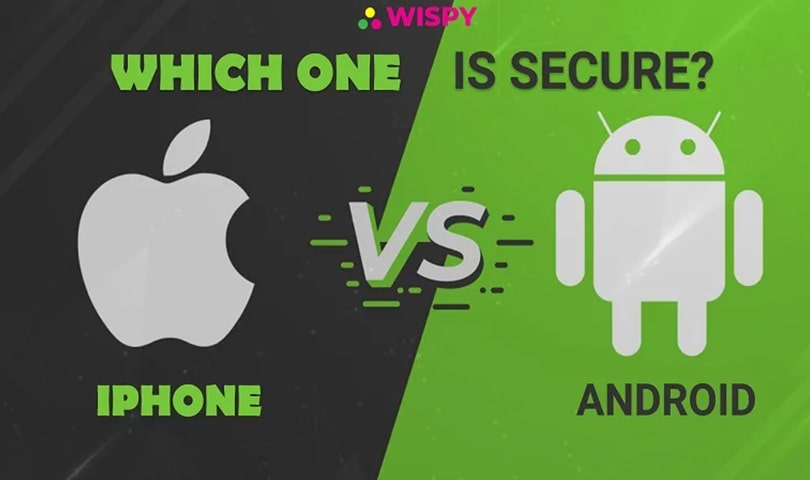 As people nowadays use their mobile devices for banking, connecting on social media, online shopping, and even daily communication, they have become more susceptible to cell phone spy apps. Whether you are an Apple or an Android user, the question of better security always circulates your mind. Cybercriminals have newer apps and phone spyware to attack our mobiles creating security issues. Operating Systems make the bigger difference in the security of your phone, where Android has the lion’s market share and iPhone being the one with secure options, we need to consider Android vs iPhone and pros and cons for both.

iPhone uses a technique called “Sandboxing”, which means essentially every app runs in its own space or a sandbox where it has its own freedom to do what it requires but cannot interact with other apps or the OS more than it is required to. This helps when an app does have a phone spyware code in it, it won’t be able to get out of the sandbox and do more damage. There are ways that Android and iPhone developers designed their OS and allow apps to run in different situations.

Whereas Google created Android for maximum openness and flexibility. That has a lot of benefits to users and developers, but it also means that the platform is more open to attacks through mobile spy apps.

Similarly, like the iPhone, Android phones provide a centralized market for mobile applications called Google Play. However, there is an offset by Android’s ability to install apps from third-party sources, a few are well-known and reputable such as Amazon, others not so much, and originate from mobile spyware hotspots in Russia and China. The criminal developers deconstruct popular apps like Angry Birds or Candy Crush, and publish mobile spyware versions and make them available for free. These are the tools used by cellphone spy app writers to repackage popular applications and add their own unwanted pieces such as phone spyware or cell phone spy apps.

The place where your phone gets most of the spyware is the App Store, there’s phone spyware hiding in the app that seems to be completely different to what it does, in such cases you install security threats on your phone without even knowing it. It’s possible to happen on both the OS but much less likely on iPhone since Apple has a more stringent process of reviewing the submitted applications to the App Store to check for cell phone spy apps. Google or Android phone’s process of publishing app involves fewer reviews and checks. The apps on Google hardly take an hour or two to publish once submitted whereas Apple’s process can take up to two weeks.

Google always tends to win the race to be first with any feature. But Apple usually tries to make things better from the start. Similar is the case with security features for both against cell phone spy apps. Facial recognition comes to your aid when someone gets hold of your phone and tries to download phone spyware. Both iPhone and Android have facial-recognition security features as part of their built-in systems. Where it makes your face the password to unlock the phone or authorize payments. IPhone users can recognize the app as Face ID and use it to avoid mobile spyware.

But sometimes it can be tricked with just a photo of a face on Android phones. Thus making it less reliable than fingerprints and actual passwords. But the iPhone has built a system that cannot be fooled and will recognize you. Even if you grow a beard or wear glasses.

For hackers and cybercriminals, the best way to make an impact is to attack the most widely used platform. So, on smartphones Android grabs the bigger chunk that is about 70% of the whole. With just the 30% crumbs left for Apple OS. That’s why Android is the most attacked by the mobile spy app. For once, if you were to consider that Android has the best phone spyware options which of course it does not. It would still be impossible for Google to close every security hole, and remove all the viruses while fighting every digital scam, that’s just the part of the package of having a widely used platform.

Apple’s iOS mobile operating system is more secure than Android. Apple itself manages the phone OS, and also has strict controls on the apps available in the Apple App Store. These controls allow iPhone mobiles to offer good security at the price of some user restriction and lesser flexibility.

iOS users are restricted to Apple-approved mobile phones and apps. Well, this is good for the protection and streamlining security from mobile phone spyware apps. Apple’s lesser consumers mean even older phones may still be able to run the newer versions of OS and apps, reaping all the benefits of new security fixes in the process against mobile spy apps. All of these measures have gained the iPhone a safer reputation among users.

One thing that instantly reduces iPhone security against mobile spy apps is whether the phone is jailbroken, jailbreaking is the process of removing a lot of the restrictions that Apple imposes on iPhones that allow the users to install virtually whatever apps they wish. This opens up the users for a lot more trouble but why they choose to do it because it gives them a tremendous amount of flexibility with their phones.

There have been very few attacks on iPhone with cell phone spy apps in the past, but those that have existed almost all attacked jail broken phones only. So, if you are considering jailbreaking your phone, keep in mind that it will make your device much less secure.

However, the iPhone is impenetrable to mobile spyware attacks. In the case, Apple misses any flaw to provide security against mobile spyware, you will have little to no control over this.

Android has always had a questionable security reputation because no one actually owns it, or regulates what can or cannot be accessed as an Android app or even sold as an Android phone.

Fortunately, Google is actively working to provide its users with secure Android OS to keep the market share. Furthermore, users can have full control over their privacy and security by customizing their Android phones against mobile spy apps.

By keeping the Android OS updated, you can manage to secure your device from malware attacks. Or you can avoid downloading apps of uncertain origin.

The designers of Android OS suggest that do not download any apps outside of the play store, instead pay and support the developers. Because they work as hard as they can to make your user experience better. Plus, when installing any new app give or allow permissions very carefully. Like for instance if you install a game that is not going to use your camera functionality then deny it. Android is an open-source operating system. Hence it allows users to install apps from unknown sources subsequently getting mobile spy apps. But if you do so Android or Google won’t be responsible for your loss.

When it comes to security comparison, Apple devices are more secure. The reason is simple, the iPhone and Mac OS are entirely controlled by Apple itself. Android, as compared to Apple, provides a less secure digital environment and can be easily accessible by malware, and spy threats. However, people can install anti-malware or other security apps to make sure that their data is safe.