TikTok is Spying on You – Myth or Truth?

Posted in News by admin 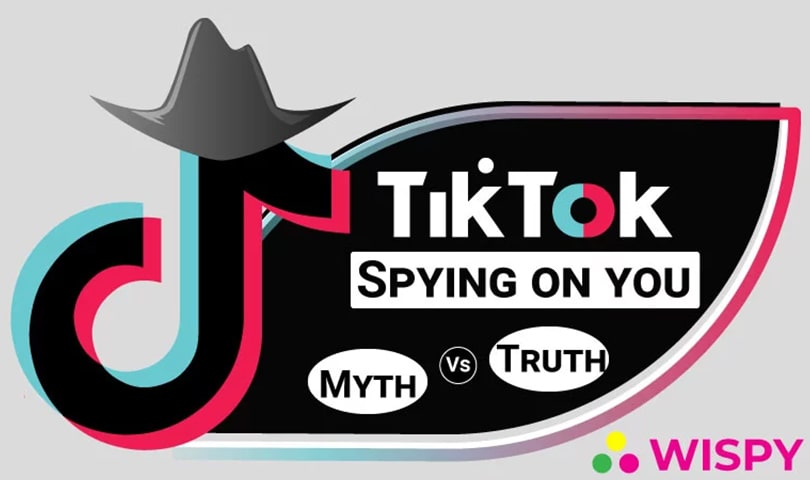 Did you ever suspect that TikTok is spying on you?

TikTok, a renowned video-sharing app, is facing some severe challenges worldwide regarding its secret mobile spying activities. The TikTok app is allegedly suspected of emulating the users’ information from the universal clipboards of cellular devices.

TikTok was launched officially in 2018, by merging with a popular app Music.ly. Within such a short period of 2 years, the app gained more than 100 million active users.

Recently, the controversies about TikTok being spying or getting banned are revolving everywhere on the digital media.

Let’s get into the insights of the TikTok hot-topic and see whether the monitoring claims are valid or just fabrication to turn down the app.

Is TikTok Spying on You?

Before we get to the TikTok spying and monitoring activities, let us first discuss a few things about privacy concerns. With millions of active users, the app is itself the primary hub of personal identities of an enormous number of people worldwide

TikTok is a Chinese video-sharing app. Being a good source of entertainment, the app is now famous around the globe.

The year 2020 unveiled that TikTok stealthily steals the user data and is capable enough to pinpoint the location of its users.

There are multiple sources that accused TikTok of stealing personal data of its users by copying the clipboard data secretly. Even various countries are now considering to place a ban on the TikTok app.

TikTok indeed has users of every age group. Certainly, it can be a great source of identity theft if any of the collected information will be shared or leaked.

Is TikTok really a security risk?

TikTok is facing distrust regarding its user security. It is not false to say that the app has some bugs that interdict its users to use the app. According to some cybersecurity researchers; the app had multiple bugs that made the app vulnerable to hacking attempts. Such app vulnerability can make hackers upload or delete videos and breach the personal space of someone.

Taking the downfall of TikTok into consideration, allow us to mention some accusations and cyber threats online against TikTok.

The relentless uproar of allegations against TikTok has shaken users as well as the cybersecurity authorities. Globally, the app is getting banned or restricted due to its unlawful activities. People are still confused whether the hype is genuine or just a myth.

What are the actual allegations against TikTok?

In July 2020, US Secretary of States, Mike Pompeo claimed that TikTok spies its users and sends the data to China. Moreover, in a British media interview, he stated that all the monitored data is ending up in the hands of the “Chinese Communist Party”.

You must be thinking that;

What made TikTok such a scandalous application?

Well, TikTok is indeed in the notice of the Trump administration since its launch. There are several apps such as; Facebook and Instagram that collect the personal information of users. You can say that the US-China conflict has highlighted the TikTok propaganda. The app indeed was vulnerable to security threats.

A report published by ProtonMail concluded that TikTok not only collects personal information of users, but it also collaborates with the CCP. Such cooperation means that data gathered by TikTok boosts censorship and surveillance of China across borders.

At first, TikTok denied all the allegations against data mishandling. But due to a lack of supportive evidence, the US banned TikTok.

TikTok Banned in The US – What is the Real Reason?

TikTok getting blocked in the US has several reasons. First and foremost reason for restricting such a popular app is security threats associated with it. Currently, there is an ongoing trade war going between China and the US.

On August 14, another executive order by Donald Trump declared a complete ban on TikTok if the parent company, ByteDance, does not sell off its American business by November 14.

The lawyers of the Trump administration clarified that TikTok is getting targeted merely for security concerns.

However, TikTok received a proposal to sell its American business to US-owned companies.  As per the recent news, ByteDance is spinning out its current operations to a new company TikTok Global, having shares of both Oracle and Walmart. The data host for TikTok Global is Oracle with 12.5% stakes in the company, whereas Walmart will have 7.5% of the share. The parent company ByteDance retains 80% of the business share.

Should You Delete TikTok?

Deleting TikTok will not ensure that you are safe from the other foreign data collecting campaigns. Facebook and many other social media apps spy on us every day. The best way to secure your personal lives is to leave every social platform.

If you are an Apple user, here is a piece of good news for you;

In the recent survey of Mysk blog researchers, Talal Haj Bakry and Tommy Mysk, the iOS 14 is capable enough to notify any data-stealing activity of apps and widgets. Investigating the beta version of iOS 14, the researchers found that Apple has provided its new OS version robust and granular security system. The new OS will instantly notify the user if any app copies anything from the clipboard.

So, Apple users, you are safe.

Android users must not worry regarding TikTok. Because the Android OS is continuously updating with technological evolution, developing the software more potent against security threats.

TikTok has been the talk of the town globally. As the recent data mishandling report against TikTok has circulated everywhere, countries are considering banning the TikTok app. However, with the current deal with the US companies Walmart and Oracle, TikTok has taken a step forward to prove its authenticity. Likewise, mobile operating systems, Apple and Android, are progressively updating the OS versions to make their device more prone to security threats.

So, do you think TikTok can harm you now?